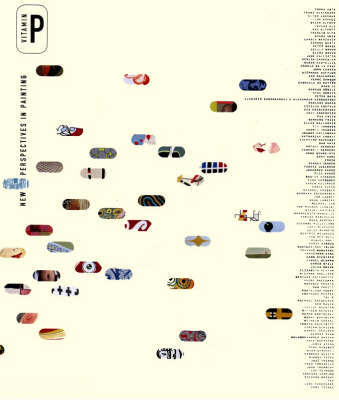 Vitamin P is an image-heavy book offering an overview of the state of painting today, and documents the most recent concerns and ideas among contemporary painters. In the wake of new media such as installation, video, performance and digital art, the traditional medium of painting has enjoyed a renaissance among a recent generation of artists. Alongside the evergrowing reputation of significant living painters such as Gerhard Richter, Agnes Martin and Peter Halley, many younger artists have chosen painting over any other medium, and are exploring new means to broaden the traditional field of "oil on canvas". It is this younger generation (who emerged in the 1990s) that Vitamin P aims to represent in an A-Z survey of 114 of its leading, new, international practitioners, with each artist illustrated by numerous examples of his or her works, accompanied by a short explanatory text. Often moving beyond the most traditional image associated with this medium, Vitamin P hopes to illustrate the richness, eclecticism, dynamism and contemporaneity of the practice of painting today. Barry Schwabsky's introductory text offers a critical survey of the evolution of painting since the late 1950's

... the most lavish, comprehensive and useful guide to the new painting." Art Monthly "... a handsome, dazzlingly produced art book.... Vitamin P is better than a biennial, a convincing show of painting's continuing ability to reinvent itself..." Vogue "[Vitamin P] demonstrates the continual reinvention and expansion of painting, be it abstract, figurative or some new hybrid.... This informative, visually striking volume is an up-to-date guide to today's painting." Art in America "[Vitamin P] provides unusual depth for a survey of this scope.... Barry Schwabsky's perceptive introductory essay provides an excellent map of how we got here..." Flash Art "Vitamin P offers heaping servings of some of the liveliest, occasionally strangest work in painting today, accompanied by images that are stunningly printed and laid out.... Vitamin P should be in every library where contemporary art is a matter of interest or even dispute." Artnews "Forget C, D and E - P is the only supplement you'll ever need." Art Review

Barry Schwabsky is a regular editor and contributor to Artforum magazine, and has worked as an editor and contributor to various other contemporary art magazines for many years. In his writing and criticism, painting is often privileged over other art mediums and young painters do often attract his attention. He contributed to Phaidon's Jessica Stockholder in the Contemporary Artists series in 1995. He has taught at the Yale School of Art and at New York University among other institutions. He lives in London, where he is Visiting Lecturer at the Goldsmiths College. About 30 international authors have written the entries on the 114 artists. Critics, curators, journalists, these authors have been chosen for their knowledge of contemporary art and painting.